Järjagården – The place for sport fishing

Take the opportunity to book our fishing package! Fishing weekend including one of Sweden’s best grayling waters, beautiful surroundings, home cooked food and comfortable accommodation with a familiar atmosphere. All this to be found in the same place – Järjagården. Read more under the tab Packages.

One of Sweden’s best grayling waters

Excellent fishing waters are never far away from Järjagården. The closest river is only two kilometres away. The river is known as one of the best grayling waters in Sweden. You might also catch a large trout. Other species that you can find is char, whitefish, perch and pike. All the fishing spots can be reached by car.

At Järjagården you have plenty of choices for sport fishing. For example you can choose to fish in the lake in the morning and move forward to the river in the afternoon. You can buy the fishing license at Järjagården.

The lakes is rich with large trout, but has also got plenty of grayling, char, whitefish, perch and pike. The area is available throughout the year and you can easily get here by car.

At Järjagården we strive to maintain a sustainable fishing. This is why we only practice catch and release.
Only barbless hooks. No live or dead baits is allowed.

At Järjagården you have everything that you need. When the day comes to an end, you can return to Järjagården for comfortable accommodation, a warming sauna and enjoy a home cooked meal in our restaurant. Always with personal service.

The philosophy of catch and release

Killing smaller fish and releasing the bigger specimens is a strange concept to some people.

A fish (or any living organism) that has attained an above average size has done so by making optimum use of its environment at all levels. This includes:
• Feeding strategy and behavior (which is both instinctive and learned) and the ability of the fish’s body to extract the maximum nutritional value (energy and growth requirements) from that food, which is genetic.
• Avoiding predation. Fish need to avoid predation at all times, which is again both instinctive (i.e. genetic) and learned.
• Minimizing exposure to less than optimum environmental conditions. The more time a fish spends living within optimal environmental conditions, the quicker it will grow and the healthier it will be (and ultimately the bigger it could grow). Again, through instinctive and learned behavior, fish tend to seek out optimum conditions of water temperature, water salinity, food availability, lack of predation, etc.

A large fish is proof that it is a master of its surroundings with the perfect survival formulae for its chosen environment. But even if all fish could make the same optimum use of their environments, they wouldn’t necessarily all grow to trophy size. To reach trophy proportions a fish must possess the genes that not only instinctively drive it to make the best use of its environment but also the genes to grow large. Interestingly, it is thought that learned behavior can be passed on to subsequent generations as instinct.

A stud farmer never kills his prime breeding stock; he never slaughters his prize bull, why should fish be any different?

In nature, for any given species, the highest mortality rate is at the lowest part of the population pyramid, i.e. a larger proportion of smaller/younger fish die than larger/older fish. If fish are to be killed, killing larger numbers of smaller fish is thus in keeping with nature’s scheme.

Big fish not only produce more eggs (and in some cases exponentially more eggs), they are also more experienced breeders. Many marine fish species form spawning congregations at sea during breeding, at which time they are very susceptible to predation, especially by sharks. A fish having reached a large size implies it has spawned a number of times and is not only directly valuable to the resource due to the number of young it will produce, but also due to the successful genetic formulae that it will pass on to its young.

Larger fish are, generally speaking, poorer table fare, either due to the consistency of the flesh and/or the abundance of parasites.

Where at all possible, we tend to bias our fish consumption towards the faster growing species. The slower growing an organism is, the more susceptible it is to over exploitation as it takes adults longer to mature. 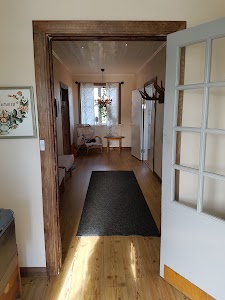 Pål Øyvind Reichelt
05:19 31 Jul 17
Charming place, very friendly and accommodating staff. You should expect a simple standard, but super cozy to make you feel at home. One star lost for thin mattresses and thin walls.